Kenneth Christiansen was ruled out many years ago by the FBI. Agent Larry Carr stated Kenny could only match the fact of being male, nothing else fit. at the time he was five foot eight inches, balding at the top, and was light skinned.

Christiansen worked for Northwest Orient. sources claim an inside investigation was done, plus someone surely would of noticed at one point he might be Cooper. Christiansen also worked for NW two decades after the hijacking. Lyle Christiansen, Kenny's brother originally contacted a private detective to have a note given to a famous Hollywood producer with hopes of making a movie about his brother. Lyle was on

a radio program and admitted he probably wasn't the hijacker, but looked like Cooper.

We have seen a lot of evidence that was attempting to make Kenny appear to be guilty, but with some good research found some problems with these known facts. The private detective seemed to have over looked,

or failed to notice several things. Kenny didn't purchase his house for cash as it's been claimed for years.

in fact, it took him 17 years to pay it off. then they put a lot of mystery around a large amount of cash Kenny

had prior to his death. property records indicated Kenny owned a large lot that paid $17,000 an acre when

he sold it in the mid 90's. the property had almost two dozen acres.

Brad Meltzer's Decoded, a conspiracy type program did a full episode about Christiansen. the main suspects where Kenny Christiansen, and his long time friend Bernie Geestman. the entire show revolved around these two pulling off the crime, but in the end they concluded that Bernie was not an acomplice to the crime. this put yet another hole in the theory about Christiansen being Cooper.

To date we don't have a single witness stepping forward to help backup any statements that others claim the witnesses stated. I find this strange that someone wouldn't want to come forward in one of America's only unsolved hijacking. we see a lot of these type of stories pop up, but they appear to look good on the outside, but when you take a look inside, a different story will surface most of the time.

"The physical description I provided is a reported fact. No matter how much you would like to change it you simply can't throw it out and replace it with theoretical fact so it fits your suspect. If you do, your investigation is doomed to fail." 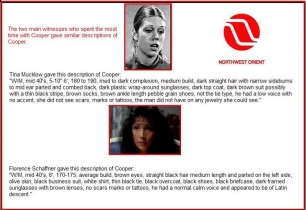 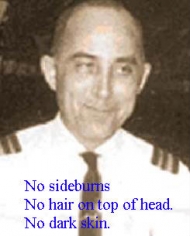 The descriptions of Cooper given by two of the main

witnesses who had a good look at Cooper. 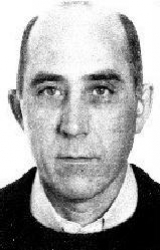 Agent Larry Carr from the FBI. 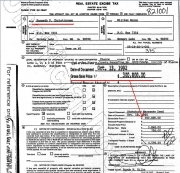 were missed by the private investigator, as well as the person researching the trail.

Sometimes you wonder if a story is being beefed up. statements have been made about the apartment Christiansen was renting before

he purchased his home. comments of a sleezy run down building has been set in place to make it appear Kenny had hit rock bottom. the

apartment building was only several years old prior to Christiansen moving in, so it's a little hard to swallow that it was already run down.

Today, those apartments are in bad shape. it's almost as if the author took this into consideration while making previous statements as

to the condition of the apartments back in 1971.

Other problems exist such as the myth surround Lyle Christiansen giving a DNA sample to the FBI for testing. one person insisted this over the years, but Lyle stated he never gave any DNA sample, and was wondering where the story came from. it appears to have come from the person who started the myth. (one person insisted) the deception came from one source. the only person pushing the story. that's

A newr claim comes from a woman who was very young in 1971. she has best memory to date for a witness. she seems to recall going into Kenny's shed and seeing him constructing the bomb. she was quickly ran out of the shed. the recall is shocking to remember this 40 plus years later. that's like remembering how full the garbage can was on a certain day decades ago. then she describes the bomb that matches some notes taken by a local sheriff during a search briefing. the problem is. he wrote it down incorrectly. his notes doesn't match what the witnesses gave. this means she more than likely seen this video since it matches perfectly with his notes.

purchased the home in 1972. The common myth was Kenny paid for his home in cash. this should

have been noticed by the private detective but was over looked.

One must wonder why none of these people have come forward, or contacted the FBI themselves. here we have one of the greatest unsolved crimes of the century, and they do nothing. nobody has been able to talk with these people to verify anything. some of these

people are getting along in the years, and might not be around much longer to verify anything.

The documents above were obtained from public records on the Pierce County property website.

How could this have been overlooked by a private investigator who claims a thorough check of records was done. this was also verified by the sole person trying to prove Kenny was Cooper. he's mentioned this many times that records were searched with Kenny. his response left mystery to the amount of money in Kenny's account.

To date, the sole member trying to prove Kenny was Cooper has clearly shown deception in statements, misleading information about Kenny, or the lack of actual proof any of these people have made these claims about Kenny. until someone steps forward to verify any of these claims, one can only come to the conclusion of the whole thing being highly suspect to say the least. you just can't tell a

story without backing up the claims. it's not our job to do this. the burden of proof is on them.

Back to top of the page

"Several inaccuracies exist in the article. First, Porteous had nothing to do with the DNA sample. (Neither did Lyle's relatives, since they were embarrassed about the possibility Kenny was Cooper) The sample was provided by Lyle Christiansen to agents out of the Minneapolis office after he called them, and this was before he ever contacted Porteous. Lyle says it was a very short visit. "

Below is a quote taken from Dropzone.com in 2013. the author is quoted many times stating Lyle gave DNA to the FBI, but he had forgotten

about the comments. he contacted Lyle, and discovered Lyle never gave any DNA and was wondering where the story came from? I don't thiink we need to look very far, it was pretty detailed to be a mistake in my opinion.

"he did a great deal of research into Christiansen's financials"

Mr. Blevins shows obvious signs of jealousy since he can't get involved with the online group that researches Cooper. he lashes out and projects his thoughts on what we believe. he can't grasp the fact that's it's his personality that is troubling to say the least. He's a human CNN (fake news) 24/7. he spends his late hours in the evening till sunrise going from this forum to The Mountin News back and forth looking for a comment to lash out with.