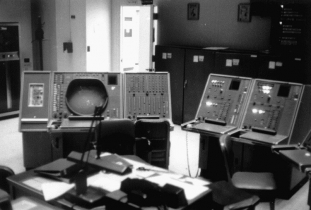 Pete Karculias was an electronic technician/computer repairman for the Q-7 back in 1967-1969 at McChord AFB.

In October 1970 the 318th participated in its third William Tell Weapons  Competition, finishing third in the F-106 Division, also present  was the CAF's 409 FS in their CF-101's, the 409th would be the second Canadian squadron to participate in the history of Weapons Meet.

In 1971, the 318th FIS was involved in a  two very interesting incidents . In May of that year one of the Squadrons F-106B flying a test flight after an routine engine change was struck by lightning while at a altitude of 35,000 feet over Sequim WA, The blast destroyed the aircraft's nose cone and caused significant damage to the forward section of the interceptor. The pilot was unharmed and was aircraft was able to land the aircraft without further incidents. The  F-106 was later repaired and flown by the squadron until 1983. F-106B S/N 59-0152 would later become the first F-106 converted for drone use.

On Thanksgiving eve 1971 a man calling himself "D.B Cooper" boarded a Northwest Orient flight in Portland, OR and once aloft threatened to destroy the plane if did not receive $200,000 and four parachutes. The plane landed at Seattle-Tacoma Airport were his demands were met, Cooper ordered the Boeing 727 to take off and head for Mexico. A short time later Two F-106's from the 318th FIS were called in to action to chase the airliner. Their task that night was to the shadow hijacked airliner and track its escape to Mexico.  Cooper would later jump from the rear of the plane somewhere over Washington state, taking the money with him. His were about is still one of the great mysteries of the 20th Century. Squadron Members of the 318th would commemorate this incident with an annual dinner which was held until the units deactivation in 1989.

McChord Field was formally dedicated on 3 July 1940, in memory of Colonel William C. McChord, Chief, Army Air Corps Training and Operations Division who was killed in a plane crash on 18 August 1937.

On 1 January 1948, the field was re-designated McChord Air Force Base. McChord AFB has played a major role in almost every military action in recent history from Vietnam to Desert Storm and Desert Shield, to Bosnia and the former Yugoslavia. In addition, members of the 62nd Airlift Wing have played significant roles in rescue and relief efforts after the eruptions of Mt. St. Helens and Mt. Pinatubo and the more recent tsunami in Southeast Asia.

McChord and the 62nd Airlift Wing continue to play a major role in Iraq and the Global War on Terror through airlift efforts and the transportation of troops from nearby Fort Lewis and Naval installations.