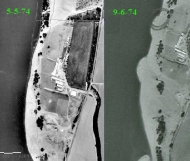 As a rule of thumb a dredge pump will pass a particle 60% the size of the discharge diameter (24” x 60% = 14” particle). A wiper or any screening device at the cutter can greatly affect the rule of thumb. If the money was bundled very tightly where it wouldn’t just blow apart then there is definitely a chance it made it through the pump. I have heard of acetylene bottles making it through a 30” dredge pump – go figure.

Dave,
Fascinating!  DB is still at work.  I think the wiper bar is just referring to a simple grate or bar across the suction end of the dredge to help keep it from sucking up large debris.  It all depends on how close the bars were placed to basically screen the debris out as to whether the money could make it through.  Then it would have to make it through the pump.  Not sure if that is possible or not without more details.  Hope this helps.

The river in the area where the money was located had been dredged August 19 through the 25th, 1974. The dredge material was deposited on the banks of the Fazio Brothers farms and spread by a front loaders. Now, according to Fazio, the sand was pushed 50 yards eah way along the beach from the center of the spoils.

Tom Kaye says the money find was far away from dredging. Palmer says the dredge spoils clay layers were right there. And Ckret uses that as part of his argument. So: the dredging was where the money was found. Tom Kaye is wrong. Tom Kaye and his team had access to the FBI files, and tested the money, and the tie. Ckret, was the username Agent Larry Carr used on Dropzone.com.

A geology professor from Portland state studied the sediment from the location where the money was recovered. He determined the money could not have been deposited prior to the 1974 dredging operation. There was a clear delineation between the 2 sediment layers, pre 1974 and post 1974.

Quote From Agent Larry Carr From The Seattle FBI

Had Cooper buried the money the night he jumped it would have been several feet below the 1974 dredged material and found in a different type of sediment then what it was discovered in.

The most likely scenario provided was that the 1977 Washougal River flood started the package of money on its journey from where it landed in 1971 towards the Columbia. Over time the bag and cords holding it together broke apart releasing the bundles of money.

Because it had been in the bag, the money had not began to disintegrate. Once out of the bag the money began it's slow rot, eventually making it into the Columbia sometime around late 1978 early 1979.

Once in the Columbia, the bundles began drifting down stream. It would have taken 14.7 hours for the bundles (if unobstructed) to make it to Tena's Bar, where 3 bundles washed up. Once on shore the money was covered over by sand, which acted as a natural preservative, leaving what was left intact until it's discovery four to 12 months later.

The FBI files stated that the dredge used in 1974 was 24 inches in diameter . This relatively small dredge would be virtually incapable of passing several bundles of bills through the system unharmed. When the bills were found, the rubber bands were brittle and crumbled off. In 1974 the rubber bands would have already been exposed to the elements for more than two years. The rubber band testing outlined elsewhere in this study indicates that after years of exposure, the bands would have long lost their ability to contain the bundles intact through a dredging operation.

The information above is from Citizen Sleuths.com 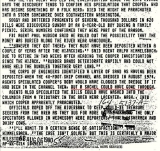 Could The Money Pass Through The Dredge 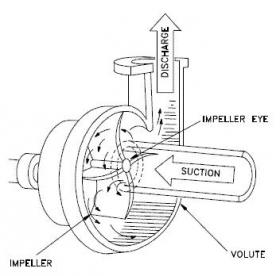 We have read that objects can easily get through a dredge system, but these are metallic objects. the odds seem to be greatly reduced when paper is envolved. 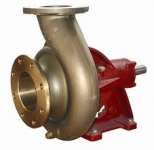 Based on what we have learned from the above prompted me to email some companies for more information. 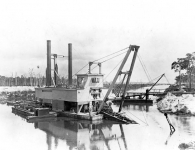 The Culebra, was the dredge that brought up the 60 feet of chain. this appears to be a Florida based dredge dating back into the early 1900's. the dredge was working on the Everglades drainage project in the St. Lucie Canal.  the photo above is dated 1924. photo is from floridamemory.com. State Archives Of Florida.

Dredging Up The Past