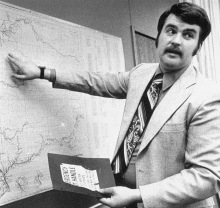 Original caption: Cowlitz County Deputy sheriff Bob Nix points to area on map where a hunter found the plastic placard that he’s holding in his hand. Authorities have identified the placard as positively coming from a Boeing 727 jetliner. And they feel that it’s the first ‘new clue,’ in the ‘D.B. Cooper’ hijacking of seven years ago. Cooper, escaped by parachuting from the jet with $200,000. Photo via Getty Images.

Outside of the plane it would be seven years before a trace of the hijacking was found, and even then it was fairly humdrum. In 1978, hunters in the Oregon woods found a plastic instruction placard showing how to lower the aft staircase on a 727-100. While it was definitively shown to be from Flight 305, the placard was found along the plane's flight path, so the clue generated no new leads. Instead, it was remarkable for reigniting interest in the case, enough to inspire a 1981 movie called The Pursuit of D.B. Cooper, starring Treat Williams as Cooper and Robert Duvall as the insurance investigator pursuing him after he successfully gets away