the Ariel tavern was a place to kick back and have a few beers and talk about db cooper. an annual party was held there every year called the db cooper days hosted by Dona Elliott who owned the tavern since 1990. dona passed away in 2015 and her son Bryan Woodruff took over the family legacy or at least tried. Bryan struggled to bring the tavern up to code and during that period was diagnosed with lung cancer in late 2019.

I never got the chance to visit the tavern  or meet Dona or Bryan. I became friends with Bryan in late 2016 and emailed back and forth all the way close to his death in Aug. 2020. I never got the chance to speak with him personally but his emails to me was wide open about his whole life and I feel honored that he respected me for that. I don't want to leave Bruce Smith out of this since he was copied to a lot of emails Bryan sent. I have a lot of photo's Bryan sent me over the years. many have never been seen. I used a lot of them in a tribute video to his mother in which he was overwhelmed with gratitude that I made the video for him to cherish. the feeling was most definitely mutual. I hold a certain amount of guilt by not really reaching out to Bryan in his final days. Bryan died on August 8, 2020. his health was a concern prior to the cancer. he often wrote about things that occurred the last couple years of his life. it was a struggle trying to keep the legacy alive. his efforts were heroic in my opinion. nobody can take that away from him. he will be deeply missed by me and others in the community along with his friends and family.

Below you will find some photo's of the happy times during the life of Dona and Bryan and all the Cooper fans who packed the tavern to do nothing but have a good old time.

VIDEO'S RELATED TO THE ARIEL TAVERN 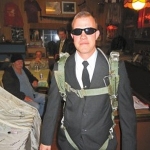 Dona and Bryan were two of the nicest people to come into the Cooper community. Dona was well known for her generosity and was always willing to share her stories surrounding DB Cooper. from 2016 all the way to 2020 Bryan was hard at work making repairs on the building that he could. he finally realized the bar was not going to happen and looked more into a museum for everyone to see and enjoy the legacy left by his mother. I hope he has rejoined with his mother and found peace.

The memorial video dedicated to his mother can be found here. VIDEO 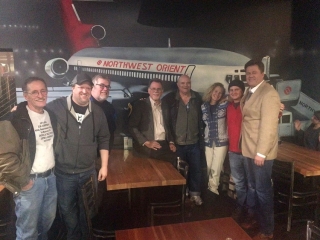